If you are convicted of felony, either a state or federal felony charge, you lose certain rights 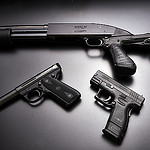 going forward including the right to own firearms. The felony gun ownership laws in Utah are very harsh. The question then arises, what happens to your firearms in the event you are convicted of a felony. Can you sell them? Trade the firearms? Transfer the firearms to a family member? Currently the law in Utah, along with most other states, and the federal law state a felon simply cannot be in possession of a gun. The law doesn’t necessarily require felons turn over their weapons upon the filing of felony charges against them. Nor does the law expressly prohibit a felon from selling a gun rather than handing them over to law enforcement. Nonetheless, local prosecutors and the U.S. Attorney’s Office have routinely routinely requested courts order felons turn over their weapons as a part of their probation or pre trial release. Additionally, individuals charged with a felony often have their firearms confiscated at the time of the arrest, even if the felony charges were non violent and/or did not involve any weapons. Defendants in cases all over the country have sought court orders allowing them to transfer their weapons or sell them to third parties and courts have issued conflicting opinions on the matter. However, the United Supreme Court has finally decided to resolve the issue by taking up the case of Henderson v. United States, U.S. Supreme Court, No. 13-1487.

Tony Henderson was a former United States Border patrol agent who was convicted of distributing marijuana. As a result of his conviction, he lost the right to possess a firearm. Following his case, Mr. Henderson sought to transfer ownership of his weapons to family members. He owned a considerable amount of firearms, 19 total firearms ranging from rifles and shotguns to handguns and related accessories. Mr. Henderson filed a motion with the circuit court asking the judge to permit him the opportunity to sell his guns or transfer ownership to his wife. The judge denied his motion. Mr. Henderson appealed and the 11th Circuit Court of Appeals also denied his request. Mr. Henderson appealed to the U.S. Supreme Court who agreed to hear the case which case as quite a shock to many in the legal community. The case will be deciding in the upcoming term of the Supreme Court and many expect the court to find in favor of Mr. Henderson.

We have dealt with numerous felony charges in Utah in which the prosecutor’s office sought to keep firearms of those convicted and or sought orders requiring defendants to hand over all their firearms. In one recent case, the prosecutor would not agree to any plea bargain which did not permit their office to keep the defendant’s firearms. Many police departments take these weapons and sell them keeping the proceeds for the slush fund of the department. In our opinion this practice needs to stop. We are hoping the Supreme Court in this Henderson case sets a clear precedent allowing felons to sell their weapons as opposed to confiscating for their own benefit.