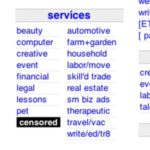 Utah’s Response to the Craigslist Issue

Authorites in Utah run many task forces designed to track, charge, and arrest individuals engaged in internet and sex crimes. Many individuals who are not seeking to break any laws find themselves entrapped by these authorities. Therefore, of course, it is best to avoid any activity on the internet that could possibly be considered a violation of any interent or sexual statute. If you or someone you know has been charged with an internet crime, sex crime, or related offense, contact the Utah Criminal Defense Lawyers at Salcido Law Firm today. 801-893-1787.

At Salcido Law Firm, we strongly believe all individuals are innocent until proven guilty. We also understand that officials often over steps their bounds and entrap those who have no intent to commit crimes online. Call us today.