Concealed Weapons and Rules of Evidence

At bench trial, Mr. Isaacson explained that he believed he did not need a concealed carry permit since he had a Second Amendment right to bear arms. Video footage from one of the responding officer’s body camera was introduced and admitted into evidence. The video showed the concealed gun inside of Mr. Isaacson’s jacket, and the court found that the gun was fully loaded and could be fired by pulling the trigger. Mr. Isaacson testified that he took the concealed-carry class twice, but never obtained the permit. The trial court found him guilty of carrying a loaded and concealed dangerous weapon, pursuant to Utah Code Ann. § 76-10-504(2), and sentenced him to one year in jail. His sentence was suspended, he was placed on probation, was ordered to complete 24 hours of community service, and ordered to pay a $100 recoupment fee. Mr. Isaacson appealed. 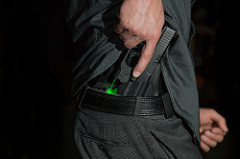 On appeal, he argued that the trial court erred when it did not allow him to call two witnesses who would have testified about his character for truthfulness. The Utah Court of Appeals reviewed the trial court’s evidentiary rulings for an abuse of discretion and its interpretation of evidentiary rules for correctness.

Rule 608 of the Utah Rules of Evidence explains that evidence of truthful character is admissible only after the witness’s character for truthfulness has been attacked. However, there was no attack upon Mr. Isaacson’s character for truthfulness. The prosecution never suggested that he was lying about anything. Therefore, the trial court did not abuse its discretion in excluding the testimony of Mr. Isaacson’s proposed character witnesses, and his conviction was affirmed.